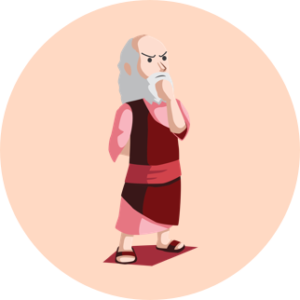 INTPs are independent, original thinkers who are creative and innovative problem-solvers. Mentally quick and insightful, INTPs can spot flaws and loopholes in existing systems. They are often seen as philosophers who offer a detached, objective, principled, insightful point of view to situations.

Preferring to work independently, INTPs dislike structure and deadlines stifle their ability to think creatively. They also tend to neglect the mundane everyday tasks and focus on reflecting on ‘bigger’ issues.

"Have you considered this perspective?"

INTPs are critical and sceptical of new ideas. They enjoy debating on macro-issues like politics, economics, social issues and appreciate a mental sparring partner. Although some consider this to be unnecessary conflict, INTPs feel that this mutual exchange leads to growth and greater understanding. When making decisions, INTPs use a detached and logical approach.

They use an internal, subjective logical system to screen every idea. This internal process is not seen by others, but what is often seen is their disagreement with popular opinion or thought. Most others may find it disharmonious and unnecessary, but the INTP sees this as necessary to come to a solid conclusion.

Full of strategic insight, INTPs scan the environment and see several possibilities. Coupled with their critical eye, they spot flaws in existing systems quickly and offer creative and innovative solutions to solve them.

However, their interest usually ends at the analysis; they are not interested in executing, preferring to leave it to some other person. Their world is the world of theory and concepts; to debate and challenge. This is why INTPs often gravitate to becoming professors, scientists and philosophers.

INTPs are casual, laid-back and easy-going. They usually adopt a relaxed pace to things and may even be accused of being too passive. They can be more intense when it comes to arguing their theories and ideas, but even those don’t need a conclusion.

INTPs put far more thought into their work than their appearance; hence they may look unkempt or casual at times. They are likely not to have a schedule they keep to or finances that they budget.

“Why do you doubt my competence?!"

Their Feeling is the weakest of their mental functions. This means that under stress, their feeling function may come out in an underdeveloped or childish way.

An uncharacteristic, uncontrolled burst of emotion like anger or rage may come out, surprising those around them if the INTP is put under too much stress.

Return to the 16 Types

PREV Development NEXT At Work
×